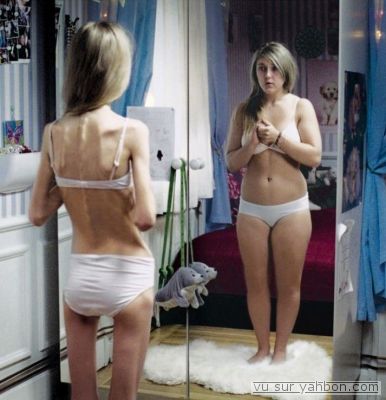 Classification
Eating disorders cause negative and harmful thoughts about the individual's body shape and weight. It has to do with the abnormal consumption or in this case lack of consumption of food. 3

Definition and Description
People with anorexia "have an extreme fear of weight gain and a distorted view of their body size and shape". Even when the individual is overly underweight, he or she continues to starve, feeling that they are still 'fat'. Consumption of food is followed by a intentional vomiting of the content afterward.
Anorexia nervosa is increasingly common among teenagers, especially young girls. There are more cases of the disorder in countries where the cultural standard of beauty is attributed to those who are skinny and lean. Therefore, Western countries where the 'thin-ideal' dominates the popular culture, more people suffer from anorexia than for example, an African country, where they are faced with famine and starvation on a regular basis. In these countries, bigger may be more beautiful.
"Anorexia most commonly affects teens, as many as 3 in 100. Although anorexia seldom appears before puberty, associated mental conditions, such as depression and obsessive-compulsive behavior, are usually more severe when it does. Anorexia is often preceded by a traumatic event and is usually accompanied by other emotional problems. Anorexia is a life-threatening condition that can result in death from starvation, heart failure, electrolyte imbalance, or suicide." 4

List of Symptoms
Physical
Psychological
Causes
Therapies and Treatment
Treating anorexia nervosa is very difficult and requires three steps:
First of all, the main goal is to return the patient back to normal weight. In order to do so, a healthy diet and gaining weight is mandatory. However, it is very hard to have a anorexic patient, who is afraid of 'becoming fat', to start eating like an average person. Therefore the support of family and loved ones is crucial during the treatment of the patient. But more than support and love, the patient requires serious therapy and counseling. Through therapy, the therapist tries to get rid of the self-destructive and negative thoughts about the patient's body shape, and replace them with healthier thoughts. 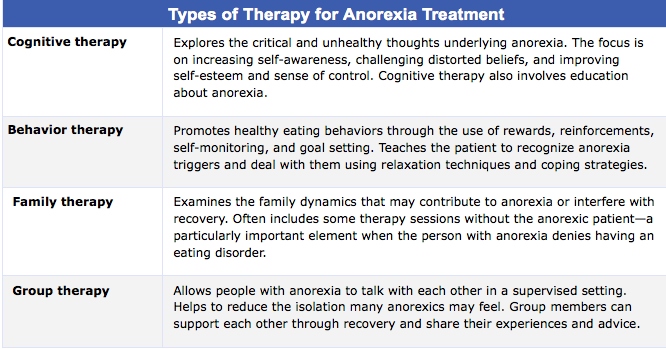 Case Study
Lisa is a 10-year-old female with mixed Caucasian and Native-American ethnicity. Her fourth grade teacher consuited with the clinical nurse specialist assigned to work with the school system via a local community mental health center. With an office in the school building, the nurse had easy access to students and to teachers who had concerns or questions about particular students.

Mrs. G, Lisa's teacher, sought help from the clinical nurse specialist after noticing a dramatic change in Lisa's weight over the first 10 weeks of the school year. Lisa had begun the year as a somewhat overweight, cheerful youngster with dark hair and bright green eyes who excelled at school and had a reputation as a perfectionist in her work.

While Lisa's schoolwork remained exemplary, her mood and appearance had changed dramatically. She preferred to stay in the classroom at recess and read, her social contacts with female peers lessened, and Mrs. G noticed that Lisa no longer ate lunch. She was observed giving most of her lunch away and nibbling at a small piece of fruit or vegetable.
Mrs. G estimates that Lisa lost between 20 and 30 lb in 10 weeks and was looking very thin and gaunt. Her clothes no longer fit, and her hair appeared dry and strawlike. When questioned, Lisa denied there were any problems at home or in the classroom. Mrs. G called Lisa's mother, who worked as an evening nurse in a local hospital. An only child, Lisa was cared for by a neighbor during the evenings when her mother was at work. Lisa's father had left the home when she was quite young, and she never spoke of him.

Lisa's mother had agreed to meet with Mrs. G but noted she was quite pleased that Lisa had lost some weight since "she was getting a little fat." She scheduled a meeting for the following week, the first available time the mother was willing to speak to the teacher. Meanwhile, Mrs. G noticed Lisa was beginning to fall asleep in the classroom, and her grades had slipped slightly. Mrs. G could not pinpoint why she was so worried about Lisa but believed something was dreadfully wrong.
(taken from findarticles.com / JCAPN) 9 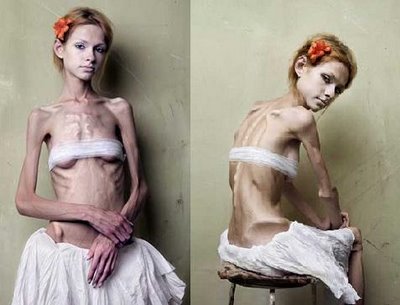