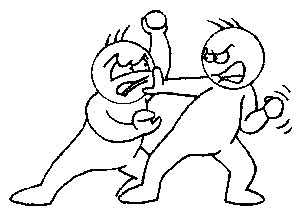 "Children with conduct disorder repeatedly violate the personal or property rights of others and the basic expectations of society. A diagnosis of conduct disorder is likely when symptoms continue for 6 months or longer. Conduct disorder is known as a 'disruptive behavior disorder' because of its impact on children and their families, neighbors, and schools." 2

What is it exactly?

"Conduct disorder is a childhood behavior disorder characterized by aggressive and destructive activities that cause disruptions in the child's natural environments such as home, school, church, or the neighborhood. The overriding feature of conduct disorder is the repetitive and persistent pattern of behaviors that violate societal norms and the rights of other people. It is one of the most prevalent categories of mental health problems of children in the United States, with rates estimated at 9% for males and 2% for females. "4
"Conduct disorder affects 1 to 4 percent of 9- to 17-year-olds, depending on exactly how the disorder is defined (U.S. Department of Health and Human Services, 1999). The disorder appears to be more common in boys than in girls and more common in cities than in rural areas. "2

How do I know if I have it?
"Aggression to people and animals
Destruction of Property Deceitfulness, lying, or stealing Serious violations of rules What causes it?
"There is no known cause for conduct disorder. The frustrating behavior of youngsters with conduct disorder frequently leads to blaming, labeling, and other unproductive activities. Children who are "acting out" do not inspire sympathy or the benefit of the doubt. They are often ostracized by other children. Parents of such children are often blamed as poor disciplinarians or bad parents. As a result, parents of children with conduct disorder may be reluctant to engage with schools or other authorities. At the same time, there is a strong correlation between children diagnosed with conduct disorder and a significant level of family dysfunction, poor parenting practices, an overemphasis on coercion and hostile communication patterns, verbal and physical aggression and a history of maltreatment.

There is a suggestion of an, as yet, unidentified genetic component to what has generally been viewed as a behavioral disorder. One study with adopted children in the mid-1990s looked at the relationship between birth parents with antisocial personality disorder, and adverse adoptive home environments. When these two adverse conditions occurred, there was significantly increased aggressiveness and conduct disorder in the adopted children. That was not the case if there was no indication of antisocial personality disorder in the birth parents. This finding has important implications for prevention and intervention of conduct disorders and its associated conditions of substance abuse and aggressiveness. " 4.

"Research shows that some cases of conduct disorder begin in early childhood, often by the preschool years. In fact, some infants who are especially "fussy" appear to be at risk for developing conduct disorder. Other factors that may make a child more likely to develop conduct disorder include:

Are there treatments? Therapies?
"Earlier treatments of youth with conduct disorder relied on legal processes to declare a child in need of supervision or treatment and thus able to be placed in residential settings established for this purpose. While residential placements may still be used, recent treatment models have relied less on such restrictive procedures. The increased visibility and sophistication of the consumer movement, comprised of families of children and youth with mental health disorders, is bringing pressure to bear on treatment providers to stop blaming families, stop removing children from their families for services, focus instead on strengths and assets in both the child and his or her family, and to use community-based interventions in several domains in which the child and family live.

Community-based interventions are sometimes called wrap-around services to describe the intention that they will be brought to the child's natural environment in a comprehensive and flexible way. The idea is to target a range of child, parent, family and social system factors associated with a child's behavioral problems. This approach has been successful in modifying antisocial behavior, rates of restrictive placement, and in reducing the cost of services. Another treatment that has been used with some success is the Child Cognitive Behavioral Treatment and Skills Training
which trains children with conduct disorder in anger-coping, peer coping, and problem-solving skills.
Parent Management Training and family therapy are also used to treat conduct disorder. Parents learn to apply behavioral principles effectively, how to play with their children, and how to teach and coach the child to use new skills. Medication is sometimes used and may be effective in controlling aggression. Generally, a variety of treatment modes are used to address such a complex disorder. Severe antisocial behavior on the part of the child and adverse parenting practices may suggest that the family will stop treatment before it can be effective, or before meaningful change can result."4
Introducing ... Tim & Sharon
"ILLUSTRATIVE CASE 1 Tim is a six-year-old boy brought to the family medicine clinic for an initial visit. On entering the examination room, the physician observed Tim spinning in circles on the stool while his mother pled, “If I have to tell you one more time to sit down…” Tim was not permitted to begin first grade until his immunizations were updated. His mother explained that Tim had visited several physicians for immunization but was so disruptive that the physicians and nurses always gave up. She hoped that with a new physician, Tim might comply. The mother described a several-year history of aggressive and destructive behavior, as well as four school suspensions during kindergarten. He often becomes “uncontrollable” at home and has broken dishes and furniture. Last year, Tim was playing with the gas stove and started a small fire. Tim frequently pulls the family dog around by its tail. Tim's older sisters watched him in the past but have refused to do so since he threw a can of soup at one of them. Tim's father is a long-haul truck driver who sees Tim every three to four weeks.
ILLUSTRATIVE CASE 2 Sharon, a 15-year-old girl, was brought to the office by her mother. Her mother explained that Sharon was suspended from school for assaulting a teacher and needed a “doctor's evaluation” before she could return to class. The history reveals that this is Sharon's 10th school suspension during the past three years. She has previously been suspended for fighting, carrying a knife to school, smoking marijuana and stealing money from other students' lockers. When asked about her behavior at home, Sharon reports that her mother frequently “gets on my nerves” and, at those times, Sharon leaves the house for several days. The family history indicates that Sharon's father was incarcerated for auto theft and assault. Sharon's mother frequently leaves Sharon and her eight-year-old brother unsupervised overnight."5