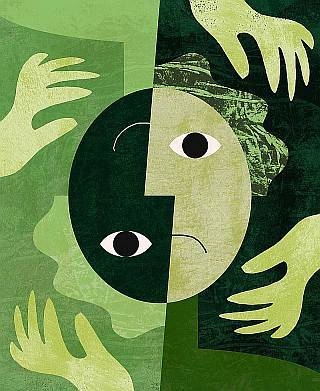 Definition: mild form of bipolar II disorder
Description: it is a type of disorder that have a wide range of mood swings. they can range from depression to hypomania. what is hypomania?: a mood of extreme irritation. cyclothymic disorder can have a variety of various mood swings that last either days, weeks, months, or even years. there is usually a mixture of these type of emotions: irritation, anger, sadness, nervousness, cheerful, and explosive.
Classification: bipolar disorder, personality disorder
Who is most likely to get it?: people with relatives that have had bipolar I or II disorder are most likely to be diagnosed with cyclothymic disorder later on. out of the whole population, 0.4% to 1 % are diagnosed with this disorder. another interesting fact about cyclothymic disorder is that typically more women are diagnosed with it rather than men.
When do people get it?: there is no specific time frame in which individuals 'get' this disorder. however, typically individuals start from an early age (birth to preschool) and that is when the disorder really starts to develop.

What causes Cyclothymic disorder?: there is no specific right answer to this question. for example, there numerous factors that go into this disorder. some may be biological meaning that the disorder had been diagnosed by a blood relative or some may be because of your body chemistry meaning that your body cells have changed over the course of your life. others may be the environment that an individual had gone through. for example, have there been lots of stress that would affect your mental and physical health?

one of the most important factors to realize when it comes to cyclothymic disorder is that there are no 'one cure' treatment. cyclothymic disorder requires a lifelong treatment and if an individual stops taking treatments, the disorder could raise to a more extreme disorder such as bipolar disorder. one of the first treatments are medication which can range from mood stabilizers, anti-seizure medications, other medications, and anti depressants. mood stabilizers are the most common and can level one's moods. these help so that there are no high levels of hypomania or depression. Eskalith or Lithobid have been the most common types of mood stabilizer drugs in the united states. as for anti-seizure medications, these are to help you control your mood swings. they include valproic acid (Depakene), divalproex (Depakote) and lamotrigine (Lamictal). other medications include anti-anxiety drugs that help individuals sleep for a longer period of time. also, quetiapine (Seroquel) helps treat maniac depression. and lastly, anti depressants but they are not usually recommended unless an individual takes it with a mood stabilizer.

This 9-year-old boy began having health problems soon after his birth (a forceps birth). He also fell down the stairs at age 1. He had many infections including ear infections and pneumonia every year for the first several years of his life. He was diagnosed with asthma at age 2 and prescribed inhalers. The asthma attacks occurred during weather changes, humidity, and physical activity. By age 7, he was diagnosed with ADHD and Tourette Syndrome. The Tourette's tics occurred head to toe and involved his eyes, neck, voice, rolling of his toes, flinching of his side, and lifting of his arms overhead. He was not prescribed Ritalin for ADHD due to an increased risk of tics. In addition, he was diagnosed with insomnia and depression at age 8 and was prescribed 2 different anti-depressant medications. He also experienced neck pain and headaches 3 times per week since age 8. During this boy's upper cervical exam, a neck injury was found, which possibly stemmed from either his birth or fall down the stairs. After his first upper cervical adjustment, his mother reported only 2 days later: 1) his attitude and personality were happier, 2) no headaches, 3) no neck pain, 4) no wheezing, 5) tics were cut in half, 6) slept through the night. One month later, no headaches or neck pain occurred over the month; no asthma or wheezing occurred over the month and no asthma medications were used; all motor tics were completely gone and only an occasional verbal tic occurred; sleeping had been consistently improved; personality and behavior had been consistently improved and anti-depressants had been cut in half; attention in school to school work and interaction with other kids in school was also greatly improved.Six weeks after the first adjustment, all symptoms were absent. All family members remarked that by having his neck injury corrected, the boy had become a completely different, happy, and healthy child. 2
(Source: http://www.erinelster.com/CaseStudies.aspx?ConditionID=4)

related disorders are bipolar I and bipolar II disorder but cylcothymic disorder is not as severe as the two bipolar disorders.