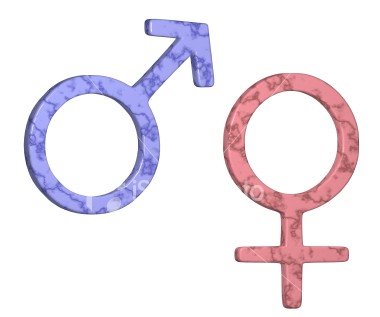 Symptoms
- There are many symptoms to this disorder.
1. When a child repeatedly states that she or he wants to become a boy or a girl, then it is likely that the child has Gender Identity Disorder.

2. A boy is suspected to have G.I.D. when he enjoys dressing up as a girl and acts like one.

3. A girl is suspected to have G.I.D. when she prefers to wear typical masculine clothes, such as suits or neck ties with pleasure.

4. When the child enjoys playing the opposite role in the make-believe play, or if a child is having fantasies of being opposite gender, then
that child is suspected to have G.I.D.

5. If the child enjoys playing the games of an opposite sex (ex: boys playing "house" or "wearing make-up" and girls playing "war" or
physical activities), then that person is suspected to have G.I.D. 3


Causes:
- There is no known cause that the world agrees on but there are certain theories for the cause of Gender Identity Disorder.
Biological Cause:
- The gender of the baby is decided by chromosomes in the DNA, which boys have an X and a Y chromosome, while girls have two X
chromosomes. The difference between male and female is that this Y chromosome secretes the male genitals. When the mother is pregnant,
male hormones are released from the male testes at third month of pregnancy, developing the masculinity for the boy. Another similar
incident to this happens thee weeks after the mother gives birth to his son, but the girls do not go through any of these processes. This is
where the problem steps in. If the male hormones are not released enough or is released at the wrong time, then the boy will have trouble
developing masculinity, leading to the condition similar to Gender Identity Disorder. The amount of hormone released to the body determines
the masculinity the boys going to develop throughout his childhood. 4

Environmental Cause:
- Children learn from their parents of how to act as a proper boy or a girl in the society. This is referred to as Social Learning Theory. If a boy
or a girl learns the way the opposite sex is suppose to behave, then the conflict of Gender Identity Disorder steps in. This theory, however, is
considered weak, compared to the biological cause. Most psychologists today go with the biological cause for the reason for people to have
Gender Identity Disorder. 4


Therapies and Treatments:
- There are not many ways to cure this because if the case gets severe, then some people take the surgery to alter their gender. However, most people want to stop themselves being turned into the opposite sex so they receive treatments at young age too. Children are recommended to receive either individual and family counseling, while adults are recommended to receive individual or couple counseling. 5


Case Study:
" It's hard to understand why third grade is when I lost most of my friends and everything fell apart. I switched schools because of small town politics so maybe it's because I could keep friends more easily than I could make new friends? Or maybe it had something to do with what my third grade teacher implicitly taught us. My third grade teacher loved to divide boys and girls up. I guess making games with boys-versus-girls motivates kids to do well for their team? So maybe other children learned to root for their team. But I just hated it. How did I get stuck on the boy's team anyway? Even if I barely had friends, at least the girls were nice. Eventually I asked if I could switch teams. But the other students laughed and my teacher scolding me not to cause trouble and get back on my side. I guess switching teams isn't allowed?

I was learning that boys and girls are suppose to be very different. There were the occasional reminders by grownups that "boys don't do that." And as the years passed, especially by third grade, I was bullied and teased for "acting like a girl." That's suppose to be an insult. I knew that even if I didn't know why. Girls played some hand-clapping games that I wasn't allowed to join. I guess that was because of what boys and girls are 'made' of. That bothered me a lot more than any teasing by boys. Maybe because I really believed it?

Hand-clapping games only partially taught me that boys and girls are essentially different. The other really big event was Chanukah. That's a Jewish holiday around Christmas time where Jewish children (at least in the US) are given gifts too. My parents used to hide our gifts in the garage, which wasn't a very good hiding place because we always knew where they were! One day I peered over the box top, shuffled around, and saw this amazingly elaborate tea set. I wondered who it was for: me or my younger sister? The box had girls printed on it, which didn't strike me as meaningful at the time. But the age started a year older than my sister. Even if I didn't understand gender, I understood age. Grownups think age is very important; it says what you can and can't do. There were things I couldn't do because I wasn't old enough. There were things I could do but my sister couldn't because I was older than her. This had to be for me! It fit my age! I remember the night my sister got the tea set; I can't remember what I got that night. I guess the gift I received that night was learning that isn't the only thing that tells us who we are and what we can do. So does gender.

I now knew boys and girls are different in essential ways. But the worst lesson to learn was that boys are girls. And I wished I was made of the stuff girls are made of. But there was a worse, almost paradoxically different lesson I was learning: being a boy is better than being a girl. Nobody said that explicitly, but actions teach a lot more anyway. In restaurants waiters or waitresses would ask me, "What would you like, Miss?" And, even though I'd just order, profuse apologies followed when of my parents made the correction. This is something that's always there no matter how old you get. Even in high school I remember being in homeroom and somehow the class was talking about "The Simpsons" (It was an animated satire tv show which, among other characters, included this extremely rebellious boy "Bart" and his shy sister Lisa who knew how trivial grownups were.)

My homeroom teacher started to say something about who he thought I was just like. But he paused and apologized in advance. I didn't really need to hear what he would say. I kind of knew I was incredibly arrogant in the way I spoke about school's arbitrary rules so telling me I'm like Bart wasn't necessary. But then he said Lisa! I was so happy because I really did completely identify with her character! But, of course, I was in high school; by then I knew I couldn't possibly like being identified as like Lisa. She's a girl. And, obviously, girls are icky. I just used my usual solution of repressing any emotional response. I simply said, 'It doesn't bother me.'" 6 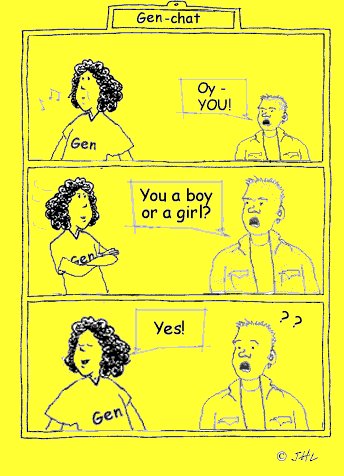