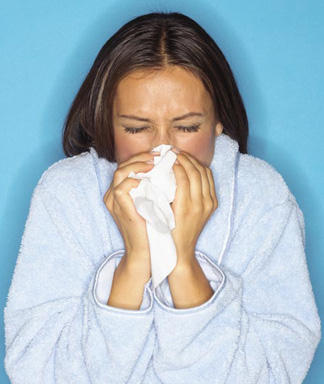 We've all been sick before, and it isn't pretty. I remember when I was in the fourth grade, I had a stomach flu after eating a hot dog (at Disneyland) that would lead me to violently throw up and not be able to go to school for 3 weeks. After that experience, I was afraid, terrified, to become sick again. I made sure that I was always dressed warm, and eating something healthy.

Why am I telling you this quite useless story? Although it's not entirely relevant, this is what leads to the main reason of why you're probably hear (not to learn about me, of course). 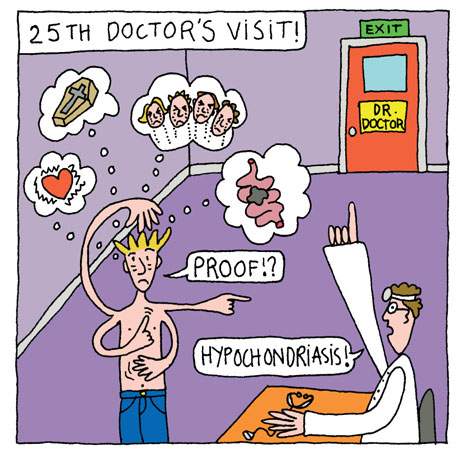 The primary feature of hypochondriasis is excessive fear of having a serious disease. These fears are not relieved when a medical examination finds no evidence of disease. People with hypochondriasis are often able to acknowledge that their fears are unrealistic, but this intellectual realization is not enough to reduce their anxiety. 1**


How is it Classified?
Hypochondriasis is a type of somatoform disorder, a mental illness in which a person has symptoms of a medical illness, but the symptoms cannot be fully explained by an actual physical disorder. 2**

DSM IV's list:
A. Preoccupation with fears of having, or the idea that one has, a serious disease based on the person's misinterpretation of bodily symptoms. B. The preoccupation persists despite appropriate medical evaluation and reassurance. C. The belief in Criterion A is not of delusional intensity (as in Delusional Disorder, Somatic Type) and is not restricted to a circumscribed concern about appearance (as in Body Dysmorphic Disorder). D. The preoccupation causes clinically significant distress or impairment in social, occupational, or other important areas of functioning. E. The duration of the disturbance is at least 6 months. F. The preoccupation is not better accounted for by Generalized Anxiety Disorder, Obsessive-Compulsive Disorder, Panic Disorder, a Major Depressive Episode, Separation Anxiety, or another Somatoform Disorder. Specify if:
With Poor Insight: if, for most of the time during the current episode, the person does not recognize that the concern about having a serious illness is excessive or unreasonable 5**

Supportive Care The person suffering from hypochondriasis has to be dealt with delicately because he or she feels anguish and distress. Maintaining a relationship with a health care professional who will be able to provide support and help to monitor symptoms is very important. 6**
A good relationship with a doctor or therapist will provide a supportive environment in which the trusted professional will be able to reassure the patient that there is no life-threatening disease, that tests and treatments are not required, but continued medical follow-up is beneficial. 6**
Drug Therapy People with hypochondriasis often suffer from associated mental health conditions such as depression and anxiety, and may be prescribed selective serotonin reuptake inhibitors, anti-depressants and anti-anxiety drugs. As some of these drugs come with unwanted side effects and the potential for addiction, it is important to research both the benefits as well as the disadvantages before beginning treatment. 6**
Natural Remedies for Hypochondriasis People with hypochondriasis generally experience stress and anxiety and often have an underlying depression. Herbal ingredients such as Lemon balm (Melissa officinalis) and Passionflower (Passiflora incarnate), can help to reduce immediate anxiety, while others like St. John's wort (Hypericum perforatum) and Oat straw (Avena sativa) can provide a more long-term solution to the underlying depression and strengthen the nervous system. A homeopath can also recommend a variety of homeopathic remedies for fear and anxiety such as Aconitum, Arsenicum album and Lycopodium, as well as biochemic tissue salts such as Mag. Phos and Kali phos. 6**
Counseling and Psychotherapy Many sufferers of hypochondriasis are resistant to psychotherapy. This is because symptoms of health anxiety disorder include the genuine belief that they are ill (or about to become ill) and feel frustrated when others suggest that the problem may be all in the mind. However, counseling, cognitive behavioral therapy and psychotherapy may be effectively used as hypochondriasis treatments providing symptom relief while helping the individual deal with underlying issues. The individual should be encouraged to discuss any other problems or issues, and not focus solely on the symptoms. Seeking psychological help can benefit the individual in changing his or her approach to the condition. 6**
Alternative Treatment Complementary therapies such as behavioral-stress management, acupuncture, hypnosis, relaxation therapy and massage can all help to relieve stress and anxiety. 6**
3

THE CASE OF THE RADIOLOGIST

A 38-year-old radiologist is evaluated after returning from a 10-day stay at a famous diagnostic centre in Sydney to which he had been referred by a gastroenterologist (a physician who specialises in diseases of the
gastrointestinal tract) after he “reached the end of the line” with the radiologist. The client reports that he underwent extensive physical and laboratory examinations, x-ray examinations of the entire gastrointestional tract, esophagoscopy, gastroscopy, and colonoscopy at the centre. Although he was told that the results of all the examinations were negative for significant physical disease, he appears resentful and disappointed rather than relieved at the findings. He was seen briefly for a “routine” evaluation by a psychiatrist at the diagnostic centre, but had difficulty relating to the psychiatrist on more than a superficial level.

On further enquiry concerning the client’s physical symptoms, he describes occasional twinges of mild abdominal pain, sensations of “fullness”, “bowel rumblings” and a “firm abdominal mass” that he can sometimes
feel in his left lower quandrant. Over the last few months he has gradually become more aware of these sensations and convinced that they may be the result of cancer of the colon. He tests his stools for bloody weekly and spends 15-20 minutes every 2-3 days carefully massaging his abdomen as he lies in bed at home. He has secretly performed X-rays on himself in his own office after hours.
Although he is successful at his work, has an excellent attendance record, and is active in community life, he spends much of his leisure time a home alone in bed. His wife, a teacher, is angry and bitter about this behaviour. Although she and the client share many values and genuinely love each other, his behaviour causes a real strain on their marriage.

When the radiologist was 13, a heart murmur was detected on a school physical exam. Because a younger brother had died in early childhood of congenital heart disease, the client was removed from Physical Education classes until the murmur could be evaluated further. The evaluation proved the murmur to be benign, but the client began to worry that the evaluation might have “missed something” and considered the occasional sensations of “skipping a beat” as evidence that this was so. He kept his fears to himself; they subsided over the next 2 years, but never entirely left him.

As a second-year medical student, he was relieved to share some of his health concerns with his classmates, who also worried about having the diseases they were learning about in pathology. He realised, however, that he was much more preoccupied with and worried about his health than they were. Since graduating from medical school, he has repeatedly experienced a series of concerns, preoccupied with what it might mean, and having a negative physical examination. At times, he returns to an “old” concern, but is too embarrassed to pursue it with physicians he knows, as when he discovered a “suspicious” mark on his skin only 1 week after he had persuaded a dermatologist to biopsy one that proved entirely benign.

The client tells his story with a sincere, discouraged tone, brightened only by a note of genuine pleasure and enthusiasm as he provides a detailed account of the discovery of a genuine, but clinical insignificant, urethral anomoly as the result of pyelogram (an X-ray of the kidneys and ureters) he had ordered on himself. Near the end of the interview, he explains that he is coming in for evaluation now largely at his own insistence, precipitated by an encounter with his 9 year old son. The boy had accidentally walked in while he was massaging his abdomen for “masses” and asked “What do you think it is this time, Dad?”. As he describes his shame and anger (mostly at himself) about this incident, his eyes fill with tears. 7**