CLASSIFICATION
Münchausen Syndrome is a psychological disorder that is currently classified under factitious disorders, disorders in which the people afflcited with this type of disorder pretend to be extremely ill or have intense psychological trauma in order to gain attention and sympathy from others. 1 It is now disputed whether Münchausen and other similar disorders should be classified under somatoform disorder, because it is unknown whether the afflicted are doing it on purpose or are seriously disturbed beyond their own control.

Münchausen's is considered the most severe of all the factitious disorders, as affecting the disease becomes the central point of the patient's life. 2

DEFINITION
In Münchausen Syndrome, the afflicted pretends to have or exaggerates the conditions of a certain injury or illness in order to gain treatment, attention, and sympathy from others. They may also do this to avoid bill collectors. In any case, the patient revels in the attention he/she receives as a patient in the hospital (hence the nickname "hospital addiction syndrome") and usually does anything to prolong hospital stay. 3 In some seriously extreme and freaky cases, the patient may have intense and vast knowledge of medicine and therefore be able to actually produce certain symptoms, i.e. infecting oneself in order to undergo operation. 4

Münchausen Syndrome by Proxy is the exact same case, only a parent or guardian does this to a child (basically, saying that their child is extremely ill and forcing the child to and from the hospital).

Statistics regarding Münchausen's can be misleading and inaccurate, as those afflicted with it tend to seek treatment at various different hospital facilities at varying degrees of severeness. Also, those who are afflicted tend to not be open and honest about their condition, thus making research on the disorder extremely difficult. However, it is concluded that (at least in the United States) it is a fairly rare disorder, and also that although it can affect children, young adults are the most susceptible to the disorder. Gender does not seem to play a major role. 5

SYMPTOMS
The funny (in a sad way) thing about Münchausen Syndrome is that its symptoms include (feigned) symptoms of all sorts to all degrees from any given disease. There are, however, a few tell-tale signs that may reveal a patient of Münchausen's: 6 and 7


CAUSES
The causes for Munchausen Syndrome are unknown, but it is greatly agreed upon that Munchausen's is caused by extremely low self-esteem/problems with self-identity. Abuse and lack of attention can lead to this disorder, as well as spending lots of time in the hospital as a young child and acquiring a taste for medical attention there. Most scientists say that there are also biological factors involved (family history of this disorder may increase chances of a patient having it). It's also highly possible that Munchausenis linked with other personality disorders. 6

Although there are no direct drugs for the disorder, drugs can be administered to treat related psychological disorders, such as anxiety disorder and depression. 7
CASE STUDY
MH is a man in his late 20s who was presented to the psychiatric ward in a drunk and distressed state.
These are the things that he claimed:

For several months, MH received intense physical therapy, treatment, and attention from the hospital staff. He was adamant that the staff members not contact his family, saying that they had already estranged him. In fact, he would become violent and threatening when any mention of contacting his family came up, although usually he was very cooperative and at times eager with the hospital staff. However, noting several inconsistencies in his medical history, the medical staff contacted his family and found out at 1) he was single (never married) and that 2) he only had 11 siblings and all of them were alive and well - so the three he mentioned were made up.

Although MH underwent therapy for Munchausen's and depression afterwards, it is not known whether he successfully returned to functioning in normal life. 8

10
A short but very interesting clip - a firsthand account of a women who suffered from Munchausen's. 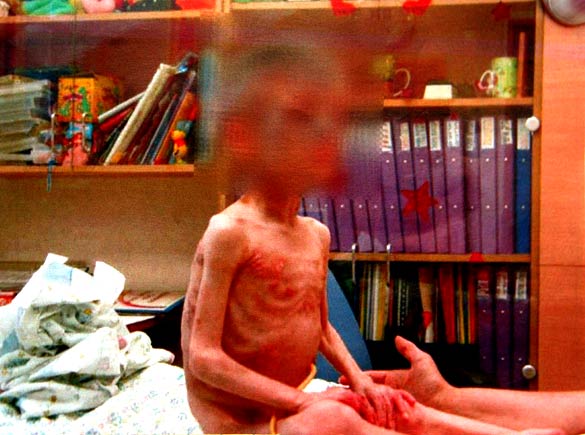 11
An extremely severe case of Munchausen's Syndrome by Proxy - the mother of this poor child purposefully starved and made him ill.