The definition of...
temperament: a person's characteristic emotional reactivity and intensity

"The inborn emotional excitability" is also part of temperament. For example, "'difficult' babies are more irritable, intense, and unpredictable. 'Easy' babies are cheerful, relaxed, and predictable in feeding and sleeping.

Studies have shown that temperament endures: 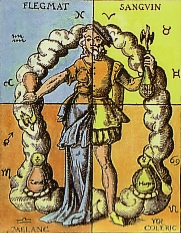 "Heredity seems to predispose temperament differences"
It is shown that nervous, easily upset, anxious infants have high and variable heart rates and a reactive nervous system.
Also, in comparison to the farternal twins, the identicle twins have more similar temperaments.

These tests and results strongly tells the researchers that our biologically rooted temperaments help form our personalities.

The definitions of...
heritability: the proportion of variation among individuals that we can attribute to genes. The heritability of a trait may vary, depending on the range of populations and environments studied

So here is a clarification before we start rolling, "We can never say what percentage of an individual's personality or intelligence is inherited."

Although differences in height and weight are inherited, nutritional influence show why adults today are taller and heavier than those many years ago. The text book says that: "heritable individual differences need not imply heritable group differences." So individual's aggressiveness due to heritage does not necessarily explain why some groups are more aggressive than others. A new social environment could change people's aggressiveness.

The most important similarity between species is our ability to adapt. Differences in environment and biological mechanism is what creates the differences between species. For example, although we all eat, our tastes and the food we eat change with different cultural backgrounds. According to the Buss: "Our shared biology enables our developed diversity."

Genes and environment, or in other words: nature and nurture work together 'like two hands clapping.'
The differences in humans are mostly because of both genes (what is inherited) and the environment.
For example, eating disorders such as anorexia and obesity may be inherited, but the environment and the Western culture (models, slim and glamorous celebrities, Hollywood, popularity etc.) also play a huge part in creating such disorders in people of all ages today.