Psychologists are interested in conformity, because it help in predicting behaviors for various individuals. Conformity in psychology refers to

"an individual's behaviors that adheres to the behavior patterns of a particular group of which that individual is a member".

People conform to abide the unspoken rules or guidelines for a behavior social norms. Conformity, a powerful force will make us want to conform to the social norm: we will behave and do things that conflict with our attitudes, beliefs, ethics, or morals when we adjust ourselves to social norm. Behavioral psychologists found interest in conformity for these reasons (stated above).

To systematically study human's tendency to conform, Solomon Asch conducted an experiment which offered great new information about conforming behavior, and further researches in the future.

Asch and many others believed researchers should be able to manipulate a person's behavior by applying group pressure to conform, if conformity was as powerful as they believed.

Visual Material:
The experimental process is simple. Imagine you are a subject who has volunteered to participate in a visual perception study. You arrive at the experiment room on time and find seven other subjects already seated in a row. You take a seat at the end of the row.

The experimenter reveals a pair of cards and asks you to determine which of the three comparison lines is the smae length as the standard line. You look at the lines and immediately decide on the correct response. Starting at the far end of the row away from you, each subject is asked individually for his or her answer. Everyone gives the correct answer, and when your turn comes you give the same obvioulsy corret answer. The card is cahnged, the same process happens, and - once again, no problem - you give the correct answer along with the rest of the group. On the next trial, however, something odd happens. The card is revealed and you immediately choose in your mind the correct response. However when the other subjects give their answers, they all choose the wrong line. And they all choose the same line. Now, when itiis turn to respond again, you pause.

You must now make a decision: to maintain your own opinion or to conform with the rest of the group?

*The other seven subjects in the room were not subjects at all, but confederates of the experimenter. They were in on the experiment from the beginning and the answers they gave were, of course, the key to this study of conformity. 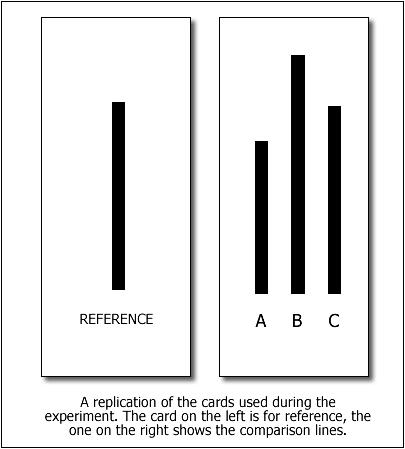 75% of participants went along with the group's consensus, and one-third of the time individuals responded agreed to incorrect responses.

Asch's results were crucial to the field of psychology in two ways:
Specific factors that determine the effects conformity:

Asch's experiment received wide support and acceptance. However, commonly heard concerns whether the conclusion was a generalization. Would the subject conform in real life and on important matters?