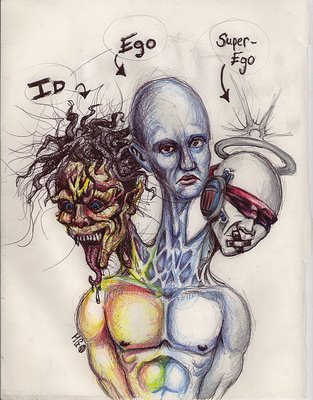 Theoretical Propositions
When the anxiety exists, we become uncomfortable and are motivated to change it. To change this uncomfortable feeling, the ego brings out defense mechanism. The defense mechanism prevents id's forbidden impulse from entering conscious mind. If this mechanism is successful, the discomfort of anxiety associated with the impulse is relieved. The anxiety is relieved through self-deception and the distortion of reality so that the id's urges will not have to be acknowledged.
Method
Freud discovered the defense mechanisms slowly over many years by interacting with his clinical patients. Ever since Sigmund Freud's death and his daughter's publication of her book, many changes have been made.

Repression:
Repression forces disturbing thoughts out of consciousness. By doing so, this avoids anxiety associated with the repressed or "unallowed" thoughts.
According to Freud, repression is used to protect the person from anxitey caused by unacceptable sexual desires. For example, a women feels sexually attracted to her father. She would probably feel anxiety if this was conscious; however, to avoid anxiety, the sexual desire was repressed.This means that her urges are still existing, but she doesn't feel any anxiety.
If thoughts are unconscious how are they discovered? It may occur through dreams or hypnosis..

Regression:
According to the research summary by International Unicery Press, "Regression is a defense used by the ego to guard against anxiety by causing the person to retreat to the behavior of an earlier stage of development that was les demanding and safer."
An example of this is when a child reverts back into babyhood because a baby brother or sister is born. Signs of this can be wanting a bottle or wetting the bed. Regression can occur in adults. For example, let's a man is experiencing midlife crisis, and he is afraid of growing old and dying. Therefore, to get rid of unconscious fears, he tries to go back to being a teenager. He becomes less responsible, he drives a sportscar wanting to date young girls, and he goes back to his eating habits that he had in his teenage years(eating fast food, which he normally wouldn't eat as he became an adult).
One last simple example of regression can be "going to mommy" whenever he/she has a problem with husband/wife.
Significance of Finding

Projection:
Projection is when you "project" or throw your impulses onto others. By doing so, this reduces anxiety. You won't be aware when you are doing this. Anna Freud provided an example of a husband who is unfaithful to his wife. To get rid of the anxiety, she projects the anxiety to his wife and accuses her of having an affair. Another example is when a woman is afraid of againg, she constantly tells her friends that they look older, have more wrinkles, or have more gray hair than before.

Reaction Formation:
When a person is experiencing unfavorable impulses, they try to get rid of the anxiety by conducting behaviors that are directly of what the id wants to behave. For example, let's say a man has lost atttraction to his wife, and wants other women. To get rid of the anxiety, he might give his wife preents and keep say "I love you" to her.

Sublimation:
Sublimation occurs when people try to find socially acceptable ways to use energy that came from unconscious forbidden desires. A simple example is a man feels sexually aroused, but he doen't want to rape anyoner, so he uses the energy to weight lifting.

Criticisms
Freuds theories have always been controversial. The most frequent critism of Freud is that his works are scientifically difficult at best, and impossible at worst. And while many experiments have tried to demonstrate the existanxe of various Freudian concepts, the results have been mixed.

Recent Applications
It is said that person who uses only regression every time life's problems become overwhelming might never develop the strategies necessary to deal with the problems and solve them. This causes the person's life to be less effective. And Freud, along with other psychologists, have said that when anxiety over a specific conflict is repressed, it is sometimes manifested in other ways, such as phobias, anxiety attacks, or obsessive-compulsive disorders.

By Joon, Julie, and Brian