WHAT IS AVOIDANT PERSONALITY DISORDER?
Avoidant Personality Disorder is one of the personality disorders when a person maintains a systematic avoidance of social contacts and any situation which might result in embarrassment or anxiety. 1

WHEN DO PEOPLE GET IT? WHO IS MOST LIKELY TO GET IT? WHY DO THEY GET IT?
"The cause of avoidant personality disorder is not clearly defined, and may be influenced by a combination of social, genetic, and biological factors. Avoidant personality traits typically appear in childhood, with signs of excessive shyness and fear when the child confronts new people and situations. These characteristics are also developmentally appropriate emotions for children, however, and do not necessarily mean that a pattern of avoidant personality disorder will continue into adulthood. When shyness, unfounded fear of rejection, hypersensitivity to criticism, and a pattern of social avoidance persist and intensify through adolescence and young adulthood, a diagnosis of avoidant personality disorder is often indicated. Many persons diagnosed with avoidant personality disorder have had painful early experiences of chronic parental criticism and rejection. The need to bond with the rejecting parents makes the avoidant person hungry for relationships but their longing gradually develops into a defensive shell of self-protection against repeated parental criticisms. Ridicule or rejection by peers further reinforces the young person's pattern of social withdrawal and contributes to their fear of social contact." 2
LIST OF SYMPTOMS (1) avoids occupational activities that involve significant interpersonal contact, because of fears of criticism, disapproval, or rejection (2) is unwilling to get involved with people unless certain of being liked (3) shows restraint within intimate relationships because of the fear of being shamed or ridiculed (4) is preoccupied with being criticized or rejected in social situations (5) is inhibited in new interpersonal situations because of feelings of inadequacy (6) views self as socially inept, personally unappealing, or inferior to others (7) is unusually reluctant to take personal risks or to engage in any new activities because they may prove embarrassing 3
TREATMENTS? THERAPIES?The general goal of treatment in avoidant personality disorder is improvement of self-esteem and confidence. As the patient's self-confidence and social skills improve, he or she will become more resilient to potential or real criticism by others.

These approaches are usually supportive; the therapist empathizes with the patient's strong sense of shame and inadequacy in order to create a relationship of trust. Therapy usually moves slowly at first because persons with avoidant personality disorder are mistrustful of others; treatment that probes into their emotional state too quickly may result in a more protective withdrawal by the patient. As trust is established and the patient feels safer discussing details of his or her situations, he or she may be able to draw important connections between their deeply felt sense of shame and their behavior in social situations.

Cognitive-behavioral therapy (CBT) may be helpful in treating individuals with avoidant personality disorder. This approach assumes that faulty thinking patterns underlie the personality disorder, and therefore focuses on changing distorted cognitive patterns by examining the validity of the assumptions behind them. If a patient feels he is inferior to his peers, unlikable, and socially unacceptable, a cognitive therapist would test the reality of these assumptions by asking the patient to name friends and family who enjoy his company, or to describe past social encounters that were fulfilling to him. By showing the patient that others value his company and that social situations can be enjoyable, the irrationality of his social fears and insecurities are exposed. This process is known as "cognitive restructuring."

Group therapy may provide patients with avoidant personality disorder with social experiences that expose them to feedback from others in a safe, controlled environment. They may, however, be reluctant to enter group therapy due to their fear of social rejection. An empathetic environment in the group setting can help each member overcome his or her social anxieties. Social skills training can also be incorporated into group therapy to enhance social awareness and feedback.

Family or couple therapy can be helpful for a patient who wants to break out of a family pattern that reinforces the avoidant behavior. The focus of marital therapy would include attempting to break the cycle of rejection, criticism or ridicule that typically characterizes most avoidant marriages. Other strategies include helping the couple to develop constructive ways of relating to one another without shame.

The use of monoamine oxidase inhibitors (MAOIs) has proven useful in helping patients with avoidant personality disorder to control symptoms of social unease and experience initial success. The major drawback of these medications is limitations on the patient's diet. People taking MAOIs must avoid foods containing a substance known as tyramine, which is found in most cheeses, liver, red wines, sherry, vermouth, beans with broad pods, soy sauce, sauerkraut, and meat extracts. 4 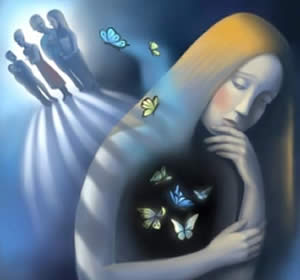